Tree trimming 2010
Since I was away the first week in December and had the flu upon my return, I didn’t plan a tree trimming party this year. So, it was a quiet year as parties go.
It occurred to me that I am clueless as to how to decorate my tree, much less put an artificial tree together. Since I have a party every year, other people have handled the details. My job has always been the food and drink.
I still trimmed my tree this year and I still had guests, but only those close to me, my mother, my sister and Steve. I had invited a couple other close friends but both were under the weather.  I was very happy Steve came over because my mother’s interest was watching the football game. My sister thought that was a grand idea too.
Steve and I trimmed the tree, he being in charge of the lights and both of us sharing ornament placement. I must admit I was impressed with Steve’s prowess at putting on the lights, especially since we were a bit short on lights. We also did a darn good job at trimming the tree all by ourselves. Designers watch out! 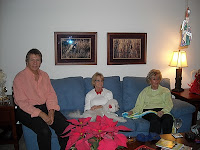 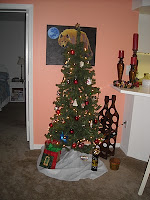 I normally make “from scratch” food for my parties. This time, with little advance notice,  I took some shortcuts and made some “from scratch” food too.  I made chocolate cookies from a mix, and the same was true for the lemon bars.
I am here to say, it’s just not the same. For most people the sweets would be acceptable but for a foodie that loves to cook from scratch, the mixes really fall short. The cookies were good but not great. The lemon bars didn’t even taste like lemon, they were just sweet.  I had to squeeze fresh lemon juice over them to get even a little discernable taste of lemon.
I also made rosemary walnuts. Those were from scratch and although they are very salty, I really love them.  Normally I use rosemary from my garden.  This year, no fresh rosemary so I used the dried version.  Fresh is much better.
Rosemary Walnuts
2 cups shelled whole walnuts
2 ½ tablespoons butter, melted
2 tsp crumbled dried rosemary (use more if using fresh)
1 ½ tsp salt ( I use less)
½ tsp cayenne pepper
Preheat oven to 350 degrees Fahrenheit. Place walnuts in a single layer in a shallow pan. Mix together the remaining ingredients and pour over walnuts. Roast in the oven for about 10 minutes, until browned, shaking occasionally. Yield 6 servings
From The Pink Adobe cookbook by Rosalea Murphy
One thing I did enjoy without disappointment was the dinner I made, Santa Fe Pasta Sauce. You will find it in a previous blog called Southwestern Pasta sauce. It came from a Cooking Light recipe. Several years ago it was among the top rated Cooking Light recipes. It is healthy, filling and tasty.
I normally make changes to the recipes I use. The changes I made to this one are minor. Because I was serving it buffet style, I chose not to use fettuccini. I wanted a pasta easier to handle.  I used a mixed grain, higher fiber curly macaroni.
I was unable to find fresh jalapenos after visiting several stores and sliced pickled peppers just doesn’t work for a former Texan.  I guess this isn’t Texas, but Brazilians have their own hot peppers. I chose some red Brazilian peppers without knowing if they were sweet or hot.  Just so you don’t have the same surprise, they are HOT! They are really good though. I think I like them better than jalapenos (but don’t tell my Texas friends)!
I did not make the chicken as I wanted this to be a vegetarian meal.  The sauce is better after it sits for a day, so don’t be afraid to make it ahead of time. I hope you try this and enjoy it. For the runners out there, it would be a good healthy carb meal.