I get bored with breakfast. I am not a big fan of cereal. I don’t think it is the best choice to start your day. I wish I could eat oats, but they don’t agree with me.  My favorite easy breakfast is to scramble an egg in the microwave and put it on a multigrain English muffin then melt some lowfat cheddar on top (a la McBreakfast).
The other day I had some asparagus in the fridge that I needed to use. Somewhere I had seen a picture of cooked asparagus with a fried egg on top and I had vowed to try it one day. I was unsure if it sounded like a good idea or not, but I thought I would give it a try.
I used to cook asparagus in a pan with water. Then the asparagus cookers came out and everyone was cooking them upright in a pot of water. I never had one of those.  I have since changed my asparagus cooking technique to roasting it in the toaster oven.
What I do is, once the asparagus is cleaned and the tough ends removed, I preheat the toaster oven to 400 degrees.  I then place the asparagus on the toaster oven pan and pour some olive oil over them (not a lot) along with some lemon pepper.  I mix it all up, leaving the asparagus in a single layer and bake them in the toaster oven for 12 minutes. 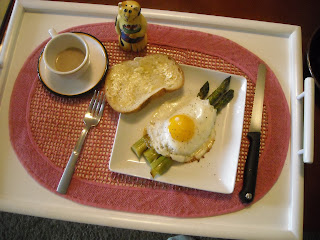 To make my breakfast, while the asparagus was roasting I fried up an egg (using olive oil rather than butter).  When the asparagus was done, I lay some (3) on a plate, lightly toasted a slice of sourdough (or multigrain) bread, then topped the asparagus with the egg and a good squeeze of fresh lemon juice.
When you break the egg over the asparagus, it mixes with the lemon juice and lemon pepper and provides a creamy lemony, hollandaise like topping for the fresh asparagus spears, without the fat of a traditional hollandaise. I use the sourdough to soak up the yolk.
Oh and I made myself a nice cup of Cuban coffee too. 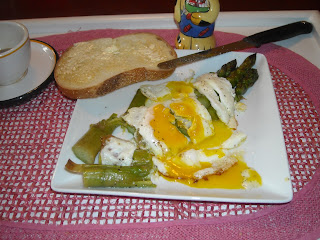