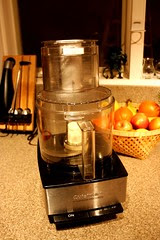 I was asking my mother, “When will fall start in Florida?” It will take me some time to get used to what they call “the seasons” here. I am starting to get bored with the same temperate days. People here think it’s hot. Obviously they haven’t lived in Dallas or Phoenix!

We are supposed to have a cool front tonight. At least that is what I heard. The 60’s!! That sounds terrific. It also sounds like great running weather. Unfortunately, I just found out I have a torn meniscus and had my joint injected with cortisone. No running for at least a week! I am bummed but hopeful the injection will “fix” the problem. If not, its arthroscopy for me!

There is always a silver lining I guess. I will make soup! I love making soup. I like baking bread too, but I don’t manage that as easily.

I am not sure how I came to enjoy making soup. My mother was a great soup maker, but some of her adventures in soup making were enough to scare me away from soup for life. Remember the old pressure cookers? You know the kinds where the valve often got clogged and the steam had no way of releasing. Yes, those were my mother’s adventures in soup making. Memorable was the time she was unable to free the valve, realizing she was hitting the danger zone; she called out a warning to protect the family. If I recall it was something like “It’s going to blow!” Yes, it did explode. I think it was beef vegetable soup. It was everywhere, counters, floor and ceiling. Hot soup.

Still we all survived without a trip to the hospital burn unit. I don’t make soups in pressure cookers. Never have, probably never will.

I do love soup making though. In fact, I worked at a Health Food Café in the 90’s. My title became “The Soup Lady”. I was in charge of creating 2 Soups of the Day for the Café. I took requests too. There was a gym above the store. I met my first personal training clients by fulfilling their soup of the day requests.

So the silver lining is that if we do get cooler weather, this would be a great week for soup. Enough about soup. Let’s talk about potatoes. Baked stuffed potatoes that is.

My mother used to make potatoes stuffed with sour cream and chives. They are pretty tasty, but my favorites are Monterey Stuffed Potatoes with Salsa. The recipe came from a Food Processor cookbook that was written by Abby Mandel (Meyer). Abby was a La Varenne trained cook that trained in some of the best restaurants in Europe.

When she returned to America, she wrote articles for the Chicago Tribune Home and Garden Section and eventually became a writer for Bon Appétit Magazine.

When Food Processors were first introduced, Abby wrote a Food Processor Column for Bon Appétit. That was my first introduction to her recipes. Subsequently, Cuisinart hired her and she wrote a number of cookbooks for them. This recipe comes from one of those books, “Fast and Flavorful”.

Mandel was the former President of the Chicago Chapter of “Les Dames d’Escoffier” and served as the President of “Les Dames D’Escoffier” International for several years. Les Dames is a professional organization for women in the culinary profession. I was a supporter of the Dallas Chapter for several years. She died last year at 75. (Am I getting old when my favorite cookbook authors are dying?)

Using a Food Processor makes this recipe a synch, but even if you don’t have one, you can make this by hand easily. You will just have to do more chopping and grating. I like to make a batch and freeze them individually, taking them out for a lunch or dinner side dish.

Truth be told you can make as many or as few as you want and just use the recipe as a template, adjusting the amounts to your needs. . You can substitute low fat dairy products for the full fat versions. I do and it is just as good but lighter.

Obviously, the recipe suits my Tex-Mex cravings I hope you will try them.

Brush potatoes with oil and bake until tender, about 1 hour. Remove them and reduce the oven temperature to 350 degrees. Slit tops of potatoes and carefully spoon out pulp (I hold the potato with a pot holder. They are hot!), leaving shells intact; reserve pulp and shells.

Medium Shredding Disc: Use light pressure to shred half of the cheese; remove and reserve

You can make this a day ahead and store in fridge, covered airtight. Bring to room temperature, place on baking sheet and bake in a preheated 350 degree oven until heated through, about 23-25 minutes. Serve immediately with Salsa.

These can also be grilled over very hot coals. They will take about 20-23 minutes to heat through.
6 servings