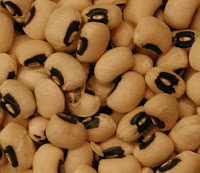 Happy 2010 everyone. This is going to be a great year. I just know it! I had a very fun New Years Eve, great company, food and not too much to drink. On New Year’s day I had my lucky Black Eyed Peas to start the year right.


To tell you the truth, I have never really liked Black Eyed Peas. When I first moved to Texas, I would go to a party and people always had a Black Eyed Pea Salad. It just didn’t float my boat. It always tasted like funky beans with vinegar. I remember thinking if this was how Texans ate, I was in big trouble.

It became a real dilemma. I wanted to have a great year so I wanted to eat Black Eyed Peas on New Year’s day, but….I had to force a few spoonfuls.

That was until one year some friends invited me over for their New Years day celebration. Brett was a friend and fellow potter and his wife BJ (don’t say it) was also a potter and vegetarian. She served the Black Eyed Peas and I was ready to force them down, when lo and behold, I liked them. No bacon, no jalapenos, no vinegar and I liked them!

So, since that day I have been making her recipe for Black Eyed Peas every New Year and I really enjoy them. The best thing about it is that it is the easiest recipe around.

So here is how I made them this year. First I went to the WholeFoods Market to buy some “fresh” picked Black Eyed Peas. The Produce man, (who by the way is very nice there) said they didn’t have them in yet. It was about 1pm and they wouldn’t be in for another 2 hours. Now that is fresh, so I agreed to return for the goods at 3. I headed for the gym and picked up “the goods” on my way home.

Once I got “the goods”, I also bought two things at WholeFoods, a white onion and some yellow miso. I put this all in the fridge and proceeded to party the night away. On New Year’s Day, I dragged myself around for awhile then took down my trusty Crockpot. I sliced enough onion to cover the bottom of the pot, dumped in the fresh peas and then added enough water to cover it and come up about an inch above it all. I then added about a tablespoon of miso and turned the crockpot on auto. What that does is heat the Crockpot to high for a little while then automatically switches it to low. I cover the Crockpot and let the peas cook until they are soft. The container of peas said they would be done in 10 minutes but I think I cooked them for at least an hour. They must have been talking about the time it would have taken if I had boiled them. Once cooked, I taste the broth and add more miso if it needs more flavor.

While the peas are simmering, I cook up a batch of brown rice with wheat berries. When the peas are soft I just scoop some up with the onion and broth and put that over some of the rice. Then I eat for good luck. It's also good to share your luck with others, so don't hoard your lucky peas!

Ok, here are some thoughts. I always forget what kind of miso I like the best with this so I have tried different kinds. Red doesn’t do it, yellow was a little bland, white is the best. So if you decide to try this, get the white miso. If you can’t find fresh peas, you can buy the frozen ones. They taste pretty good too.

If you don’t have a crockpot, just put it all in a dutch oven and cook it on low. Cover it but stir it now and then until it’s done. I measure the brown rice/wheat berry mix with the amount of water I would normally use for brown rice. Most of the mixture is brown rice with about 1/8 of it wheat berries just for the added chewiness (5/8 cup of brown rice,not quick cooking, 1/8 cup wheat berries to 2 cups water or broth) You can make brown rice by itself and it will still be good. You don’t have to only make this on January 1st. It is good anytime!