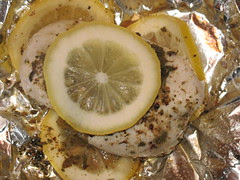 I was reading a bio on Sheila Lukins who recently died from Brain Cancer. If you are a foodie, you probably know her name. She has been the food writer for Parade Magazine for 27 years. If you are not a foodie, you may not realize it, but she and partner Julie Rosso were front runners in the now popular pre-packaged, gourmet, take home meal business.

Together they opened the Silver Palate http://www.worldpantry.com/cgi-bin/ncommerce3/ExecMacro/silver/home.d2w/ in NY in 1977 offering Gourmet Takeout to busy New Yorkers. They opened a few years before Dean and Deluca’s and long before places like Eatzie's existed. After great success, they started a line of gourmet food products that you still see on the shelves today. This included vinegars, salad dressings, mustards and sauces.

Contrary to what it may appear today, I was not always into cooking. My mother, grandmother and aunt were all excellent cooks, but as a child I had other things to do than spend time in the kitchen cooking. I was a tomboy, busy climbing trees, seeing how many blocks I could ride my bike without touching the handlebars (early balance training) and important things like that.

My first attempt at cooking was when I was 16 years old and dating Kevin, my future husband. Since I was so smitten by him, I decided I would make his favorite dessert for his birthday, Pineapple Upside Down Cake. It sounded like a great idea even though I didn’t have any experience in the kitchen.

I remember buying a box of the cake mix, then asking my brother Robert to show me how to break an egg so I could make it. I don’t remember if it turned out any good, but Kevin went AWOL for about a year (that’s another story) and never had a piece of the cake. Looking back the disappearing act may have stemmed from an intuitive desire to live past his birthday! He might have gotten salmonella from the pieces of egg shell I probably left in the cake.

In college, Kevin, who I will now refer to as “the saint” put up with my continued attempts at learning to cook. Hamburger helper was the order of the day and he managed to down a serving once he figured out that it might be more edible with lots of chopped green olives on top. The great thing about Kevin is that he always said “Thank you” after a meal, even if it was just doctored up Hamburger Helper. Of course that just fueled my desire to learn more and use him as a guinea pig for my future cooking adventures!

My point is, I learned to cook and developed an interest in cooking by the need to cook for myself (and for “the saint”). Since that time, my hobby has been reading cookbooks. I would say it is almost a sickness at this point, but I have learned a lot along the way. I have the added benefit of being the “go to” person for questions my sisters or friends have about cooking.

The Silver Palate Cookbook by Sheila Lukins and Julie Rosso has been one of my favorite cookbooks through the years. I have had my copy since the early 80’s. I was reading another blog tonight about Sheila Lukins and the author asked their readers to share their favorite recipe from the cookbook.

I realized I had not cooked many recipes from the book. A lot of the recipes are a bit too sophisticated for my everyday life and often way too rich for my taste. Cream and butter were not yet on the don’t eat list when the book was written. Still I have used the book for ideas and technique information.

Back in the 80’s I became interested in making my own flavored vinegars with ingredients from my garden. Purple basil vinegar was one of my favorites. In the Silver Palate cookbook, they use a Raspberry Vinegar. Back in those days, this wasn’t a vinegar you would find in the stores. The Silver Palate did have a Raspberry Vinegar for sale and I remember reading the ingredients list which included fresh raspberries and cinnamon. I made my own vinegar using the same ingredients and it was wonderful (and a lot easier on the budget).

So Sheila Lukins had an impact on my life and interest in cooking. Other interesting facts are that she helped develop the menu for the food served on United Airlines flights and was honored with an award of distinction by the airline. The Silver Palate Cookbook was named to the James Beard Foundation Hall of Fame and one of her other cookbooks, The USA Cookbook was nominated for a James Beard award.

In thinking about my favorite recipes from the Silver Palate Cookbook, three recipes come to mind. There is the Pasta Sauce Raphael with artichokes and a whole heck of a lot of black pepper. Three tablespoons of whole black pepper to be exact. I must admit, I never used quite that much.

The second recipe is not all that healthy unless butter comes into favor as a health food. It is the Shortbread Heart cookie recipe. Butter and sugar, Now you have the picture!

Finally, there is a recipe I no longer make but prior to my vegetarian conversion, I made it quite a few times and it was great, Chicken with Herbs and Lemon baked in foil. I varied the herbs depending on what I had fresh in the garden. Since I have been posting a lot of vegetarian recipes, I will include this recipe today (from reading about Lukins, I learned that her Chicken Marabella recipe was wildly popular. I have never tried it though).

In any case, if you have any interest in cookbooks, I would recommend you take a look at Sheila Lukins books (http://www.amazon.com/s/?ie=UTF8&keywords=sheila+lukins+cookbooks&tag=googhydr-20&index=stripbooks&hvadid=3400785761&ref=pd_sl_80wd6pauvu_e). My two favorite are as mentioned, The Silver Palate Cookbook and also “New Cooking Basics”.

Chicken with Lemon and Herbs

1 cup mixed chopped fresh mint, dill and parsley in about equal proportions or to taste.
2 garlic cloves peeled and minced
6 skinless boneless chicken breast (about 4 ½ lbs)
Salt and Fresh Ground Black Pepper to taste
2 lemons cut into 6 slices each
4 tablespoons (½ stick of unsalted butter) you could probably mix it half and half with Smart Balance or Olive oil

2. Mix the herbs and garlic in a bowl. Flatten the chicken breasts by pressing them gently against the work surface with your hands (ok I would recommend you lay the chicken on a paper plate or foil, cover with another plate or piece of foil and press so you don’t contaminate everything!)
Arrange each breast on a large piece of aluminum foil and season with salt and pepper. Sprinkle the herb and garlic mixture over the chicken.

3.Arrange 2 lemon slices on top of each breast. Dot with butter and seal the packets. Set on a baking sheet.

4. Set the packets on the center rack of the oven and bake until done, 30 minutes.

Transfer the packets to serving plates and allow the guests to open the packets at the table (I would check one for doneness before serving so there are no surprises when they open them!!).
This makes 6 portions